One of the more controversial provisions of the Tax Cuts and Jobs Act of 2017 (TCJA) is the $10,000 cap on individual taxpayers’ federal deduction for state and local taxes paid, often referred to as the SALT cap. In the aftermath of this legislation, states began crafting workarounds to assist certain individual taxpayers – those who are owners of a “pass-through entity” (PTE) – in bypassing the SALT cap on their federal return. However, there has remained uncertainty as to whether the IRS would permit such workarounds. To provide clarity, on November 9, 2020, the IRS issued Notice 2020-75, which provisionally endorsed workarounds involving entity-level state income taxes on pass-through entities devised to bypass the $10,000 SALT cap.

Since the notice was released, approximately 20 states have adopted legislation providing for a SALT cap workaround. While each state’s SALT cap laws vary, these laws effectively shift the tax incidence to the entity level and provide the PTE owners with some form of a credit, deduction or exemption for their individual state income tax return.

On May 4, 2021, Georgia joined a growing number of states implementing a SALT cap workaround with its enactment of HB 149, which is effective for tax years beginning on or after January 1, 2022. More recently, the Georgia Department of Revenue finalized its regulations, offering additional guidance for taxpayers considering the election.

Pursuant to HB 149, a qualified PTE may elect to be subject to Georgia income tax on its business income before the income passes to the owners. Upon making the election, the PTE is subject to the entity-level tax at the maximum Georgia individual tax rate of 5.75%. Consequently, the shareholders or partners to an electing PTE do not recognize their respective share of the Georgia income subject to the entity-level tax. Qualified PTEs include S corporations and partnerships that are 100% directly owned and controlled by individuals. Put differently, PTEs with corporate shareholders or partners are not eligible to make the election, which is uniquely restrictive compared to other state SALT cap workaround laws.

Georgia’s SALT cap workaround also incorporates a novel mechanism, providing that the individual owners subtract the income subject to the entity-level income tax from their individual Georgia return. To contrast, other state SALT cap workaround laws generally apply a state tax credit for the taxes paid on their behalf by the PTE. 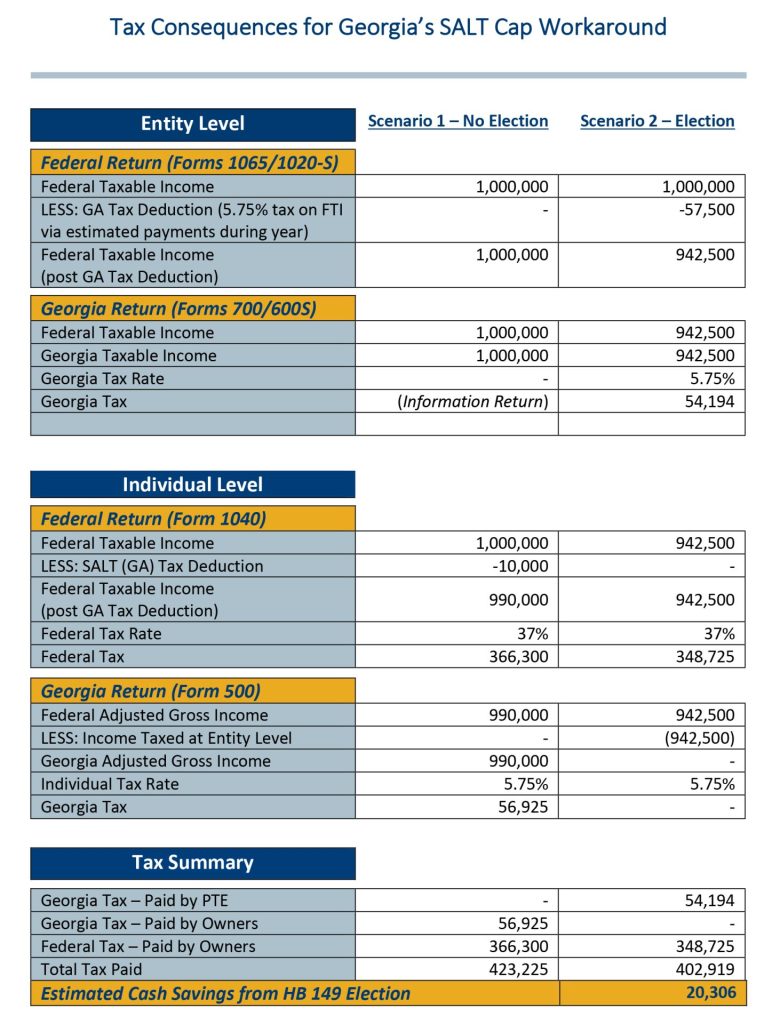 To make the election, the entity denotes its intention on Georgia Form 700 or 600S by the filing deadline, including extensions. PTEs considering the election must independently determine how to obtain owner consent.

Georgia’s regulations provide that the election must be made at the entity level except where the entity is disregarded (e.g., single-member LLC or Subchapter S subsidiary). In those cases, the regarded, qualified parent may make the election for itself and its disregarded members.

At first glance, making the HB 149 election appears straightforward, but the facts are rarely as simple as those provided in the illustration above. Taxpayers must determine whether the federal benefit via increased SALT deductions outweighs the impact from the state-level PTE taxes. This is particularly true for taxpayers with a multistate presence.

One consideration is whether the HB 149 election would result in the entity paying tax at a higher rate than at the individual level. However, since the IRS’ endorsement for the PTE tax regime, practitioners stress that a more pressing concern to states’ SALT cap workaround laws is whether all or some states will treat entity-level taxes as creditable for resident income taxes. Nonresident owners are particularly at risk for bearing the brunt of the entity-level tax without receiving an offsetting credit. The following example illustrates the potential harm to a nonresident PTE owner:

Assume individual R is a resident of Maine who is a partner of partnership P conducting business in California and each year pays tax of $1,000 to California on R’s distributive share of P’s net taxable income. Also assume that R does not receive a federal deduction for the $1,000 payment because it has already exceeded the $10,000 SALT cap, but R does receive a full Maine tax credit of $1,000 for the tax paid to California. With the workaround, P, rather than R, pays the $1,000. The payment is fully deductible by P, and therefore R receives a federal tax benefit of $370 ($1,000 x 37%, the highest marginal individual federal tax rate). R still bears the economic burden of the $1,000 payment to California. However, because the payment is made by P, R does not pay nonresident tax to California and therefore may not receive a Maine tax credit of $1,000. With the workaround regime, R is out-of-pocket in the amount of $630 (i.e., $370 federal tax benefit less $1,000 lost resident state tax credit).

Georgia’s regulations specify that Georgia-resident individual owners would still be eligible for a credit for other state taxes paid by the individual that are not taxed at the entity level. The regulations also provide that resident owners would be eligible for an adjustment to their AGI on their Georgia individual return to the extent such income was subject to an out-of-state entity-level tax. Further, Georgia law currently allows residents to deduct partnership income that is subject to an entity-level tax in another state. Georgia provides similar relief to S corporation shareholders, but only where another state does not recognize an S corporation. It should be noted that Georgia’s passage of HB 149 did not include an amendment to their existing resident state tax credit laws in anticipation for instances of a claim for a resident state tax credit against personal income tax for PTEs electing and paying a similar tax in another state.

Georgia’s regulations require an electing PTE to make estimated tax payments as subject to the same due dates and forms as C corporations. However, the regulations also provide that estimated payments made by the individual shareholders or partners are not transferrable to the electing PTE. Similarly, estimated payments made by the electing PTE are not transferrable to the individual shareholders or partners. This is particularly important because, although taxpayers will not be making this election until the 2023 calendar year, taxpayers must consider whether they intend to make the election for purposes of upcoming estimated payments. Consequently, there may be an unintended pressure placed on the transferrable credit market (i.e., Georgia film tax credits) for taxpayers that are uncertain on making the Georgia PTE election that will seek to offset prospective penalties for not filing and remitting estimated tax payments to Georgia. Further, when evaluating whether to make the election, taxpayers should be advised that the federal state and local tax deduction is based on the calendar year in which the taxes are paid.

Lastly, it is important to account for how tax attributes will flow between the electing PTE and its shareholders or partners. Specifically, while the Georgia regulations permit an electing PTE to allocate some state credits, such as the Georgia Jobs tax credit, to its owners, tax attributes obtained by the owners are generally not eligible to be transferred to the electing PTE. Also, Georgia regulations permit electing PTEs similar treatment to C corporations, wherein the entity can offset up to 75% of its Georgia income tax liability with these tax credit donation programs, such as the Georgia rural hospital credit or education expense credit.

These complex tax issues can be difficult to navigate, but our state and local tax experts can help. Please contact Brian Sengson or Stephen Bradshaw by calling 770.396.2200.